Summer SEK offers, once again this year, the incomparable experience of being part of the crew of the schooner Cervantes Saavedra and enjoy sailing the waters of Formentera. Students will learn about marine biology and obtain the official diving qualification with the prestigious marine biologist Manuel San Félix.

Students will start learning to sail from the first day, and learn, among other skills, to tie sailor knots, to handle rigging on the ship and to use navigation charts. All this in an environment where they will develop social skills and leadership.

The educational space where this project is carried out is the Mediterranean Sea itself, home to a species that has declined greatly in recent decades and is now close to extinction: posidonia oceanica seagrass. Despite the importance of this plant for marine ecosystems, for most people it is a great unknown. Posidonia seagrass contributes to maintaining the quality of our waters by oxygenating the underwater ecosystem. Without this plant, life in the Mediterranean Sea would die out.

Over the course of the SEK Posidonia Lab programme, students learn navigation techniques and safety at sea, how to use the rigging of the ship, to interpret the nautical charts, to navigate following the different constellations and the use of different sailor knots.

Furthermore, they strengthen ties with peers and leadership skills, discover the importance of teamwork, and learn the skills necessary to obtain the scuba diving certificate.

The crew of the schooner is made up of a group of expert sailors led by captain Norah Fernández Cuesta and the biologist Manuel San Félix. In addition to this crew and the students, on the voyage, which takes place mainly around the Balearic Islands of Formentera and Ibiza –  home to over 50% of the oceanic posidonia in the Mediterranean Sea – a group of expert teachers in different disciplines such as marine biology, astronomy or history embark every year.

An origin that dates back to the 30s

The story of the brigantine-schooner the Cervantes Saavedra began in 1934, when she was built at the Swedish shipyards Götaverken AB in Göteborg under the name Sydost-Brotten 33. In 2005, University Camilo José Cela chartered her to carry out the first of the Travesías de España y la Mar programme, which, sponsored by the Royal Spanish Academy of the Sea and the Chair in Maritime Studies of the university itself, would see a group of 40 students visit Lepanto. The second of the voyages would take place in 2006, as a tribute to Christopher Columbus.

Following the success of both projects and with the intention of continuing with them, in 2007, Felipe Segovia Olmo becomes the new owner of the Amorina, transforming it into a training ship. The ship was placed under the Spanish flag and is renamed Cervantes Saavedra.

Since then, the students of SEK Education Group have been given the opportunity to take part in marine biology projects aboard the schooner, sailing on the same waters in which they carry out their research. That is how the SEK Posidonia Lab project was born, where students discover more about the environmental problems that surround us, learn how to tackle them and how to try to avoid mistakes made in the past. 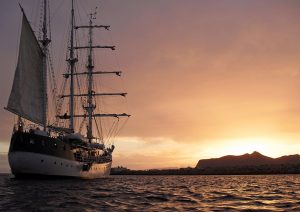 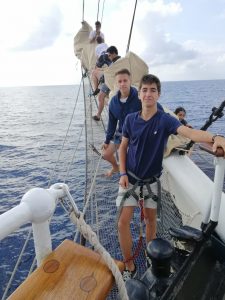 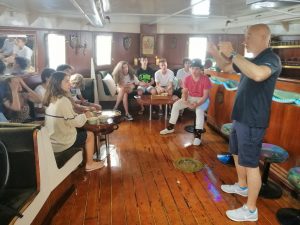 Síguenos Webmail Trabaja con nosotros
We use own and third party cookies to provide a better user experience, and have data traffic on our site.
If you continue to browse, consider accepting its use. You can get more information on our More Information Agree
Privacy & Cookies Policy
Necessary Always Enabled