Humanitarian support, coordination, solidarity, human rights, children’s rights. With these words, Ignacio Martínez, coordinator of the Madrid UNICEF Committee, opened his talkin on the humanitarian crisis in Ukraine, organised by the Felipe Segovia Foundation. The conversation, shared online with the entire SEK Educational Community, focused on the situation of the armed conflict in Ukraine and the work of UNICEF in this humanitarian emergency. 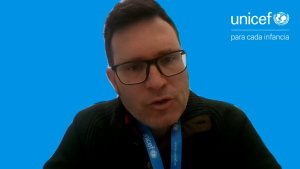 The coordinator of the Madrid UNICEF Committee was clear on one thing above all else,  “War is the greatest failure of a society” This failure is what the different humanitarian organisations working in the area have to work with.

In the case of Ukraine, the speaker described the role of these NGOs in the protection and provisioning of the civilian population, the creation, management and control of humanitarian corridors or the reception and shelter of refugees who have fled the country, especially children.

The fundamental objective of humanitarian organisations in any crisis, in addition to demanding a ceasefire, the cessation of attacks and the protection of rights, is initially to attend to the emergency. The first hours of action are fundamental, and the needs must be defined in the first 72 hours of the conflict.

In this assistance, a perfect coordination is established between all the organisations present and each of them is assigned a coverage area. In the case of UNICEF, its actions focus on the protection of children. Nutrition, water, sanitation and hygiene networks and education.

UNICEF is also involved in the essential creation of humanitarian corridors, for which to safely evacuate the civilian population. Together with the UN, it establishes the needs that exist and participates in the negotiations to create them. In the case of Ukraine, the maintenance of these corridors is proving to be very complicated, since the Russian offensive is not respecting them, and they are under continuous attack.

After the first hours of emergency, the deployment of resources to meet basic needs, protect, provide health care, psychosocial assistance, maintain education…, all perfectly organised and offering the appropriate channel also to all international solidarity (of countries, of individuals), which emerges and, if not controlled, can even become counterproductive.

UNICEF has been working in Ukraine for 8 years prior to the outbreak of the war and still maintains five offices open within the country, with increasingly worse working conditions and real danger. 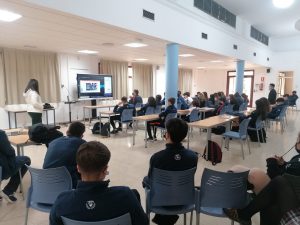 The objective is for the war to end, not to fall into the “abandonment effect”, in which many other forgotten emergencies that exist all over the world, and that the reconstruction of the country can be organised, international development cooperation established, and a return to a normality that will never be the same.

Ignacio Martínez ended his speech by highlighting the importance of maintaining a permanent support network like the one that UNICEF has in SEK Education Group (the first Spanish educational group to sign a collaboration agreement with this humanitarian entity years ago) before, during and after the emergency.

SEK Education Group has launched various solidarity initiatives for the emergency in Ukraine and has educated Ukrainian children who have fled the conflict at its SEK International Schools.

If you want to contribute to the work of UNICEF, you can do so here.